"A uniquely talented seafaring girl steps up to save those she loves.

Ottilie Jo Maul, better known as Otter, has grown up aboard her fathers’ ship, the HMS Tempest, the only boat licensed to seek out dragons. Otter uses her gift of telepathically sensing the presence of dragons to gather their shed skin for the queen and protect the secret of the dragons’ existence. Meanwhile, Sofia finds herself uniquely positioned to demand the queen halt the use of the “relocation ships” responsible for the losses of many parents and children. When the Tempest becomes dangerously damaged, London, a stowaway-turned-friend, tells Otter of a place called the Netherwhere, where they may find the help their sinking ship needs along with the answers to other mysteries. . . . an array of both common and more unusual fantastical creatures and a cheeky, lovable main character, supported by a close-knit family, will please readers." Kirkus Reviews 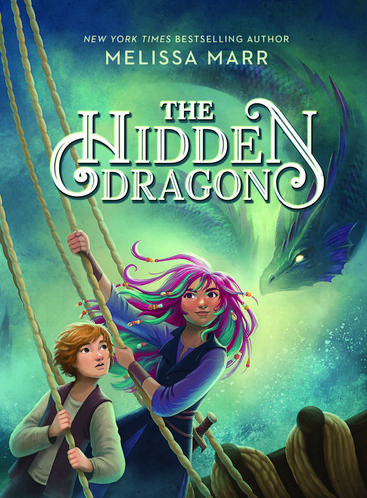 Find it on AUDIBLE

A sea-faring girl and her friends take on pirates and grown-ups, and bond with dragons, as they work to make the world a better place, in this spellbinding fantasy by New York Times bestselling author Melissa Marr.

Otter (short for Ottilie) is a girl who is most comfortable on her family’s ship, the Tempest, where she and her fathers collect the dragon hides that protect the queen’s guards. But all is not well in the kingdom, and it’s not clear if the queen is to blame. The streets are full of homeless kids, and now one of them, a street-smart boy called London, has stowed away on the Tempest. He befriends Otter, and soon they realize that the fate of the kingdom needs to be in the hands of the kids. For in every tight spot—during pirate attacks and navigating the magical land of the Netherwhere, where they get ship-wrecked—it is the quick-witted kids who save the day. As they work to fight injustice and protect the defenseless, they earn the respect of the realm’s most magical creatures—dragons and gargoyles—who all bond together as a force for good. Melissa Marr spins another fabulous fantasy, centered on family and friends, and introduces readers to the most splendid magical creatures.

"Twelve-year-old Ottilie “Otter” Jo Maul is most at home aboard her adoptive fathers’ ship, the HMS Tempest, which sails the Crimson Sea collecting shed dragon hides at the Glass Queen’s behest. When streetwise orphan London sneaks aboard the ship in search of a better life, he and Otter forge a bond that serves them well after a dragon-related mishap at sea leaves them shipwrecked in a magical realm, Netherwhere. There, Otter discovers hidden truths behind her adoption and her affinity for dragon-finding. Meanwhile, street thief Sofia infiltrates the Glass Queen’s court, hoping to shine a light on the plight of the empire’s children, many of whom are unhoused or have gone missing.

Marr gently works in themes of hope, compassion, and social responsibility, set against the backdrop of a fanciful, magic-filled world reminiscent of the Victorian era. Tidily resolved conflict gives way to an uplifting, character-focused tale about family and grand adventure." -- Publishers Weekly