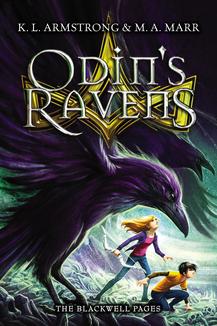 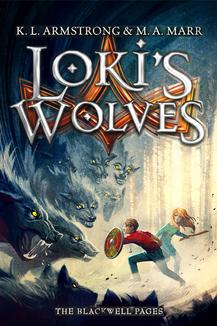 “The runes have spoken. We have our champion . . . Matthew Thorsen.”

Matt hears the words, but he can’t believe them. He’s Thor’s representative? Destined to fight trolls, monstrous wolves and giant serpents . . . or the world ends? He’s only thirteen.

While Matt knew he was a modern-day descendent of Thor, he’s always lived a normal kid’s life. In fact, most people in the small town of Blackwell, South Dakota, are direct descendants of either Thor or Loki, including Matt’s classmates Fen and Laurie Brekke. No big deal.

But now Ragnarok is coming, and it’s up to the champions to fight in the place of the long-dead gods. Matt, Laurie, and Fen’s lives will never be the same as they race to put together an unstoppable team, find Thor’s hammer and shield, and prevent the end of the world. 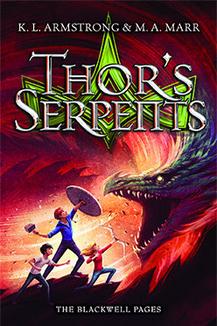 By KL Armstrong and MA Marr

Not all gods live forever.  The Norse gods died; they’ve been dead and gone for centuries, but that doesn’t mean the gods or their myths are forgotten—especially in the small town of Blackwell, South Dakota.

Norse legends walk among us…

Thirteen-year-olds Matt, Laurie, and Fen have beaten near-impossible odds to assemble their fellow descendants and champions of the Norse gods, coming face-to-face with trolls, fire-breathing monsters, and even death. Now they have to tackle their most epic quest of all: stopping the apocalypse in its tracks. They’ll need all their strength and wits—and each other—in order to defeat the fierce monsters and obstacles that await.

But when they learn that Matt must go into the final battle alone and Fen and Laurie are pulled in other directions, the friends have to accept that they can’t take this journey together. Matt, Laurie, and Fen will each have to fight to be true to themselves and one another, and to survive. With the fate of humanity hanging in the balance, there isn’t a lot of room for mistakes—and to save the world, each of them must learn what it really means to be a Champion.

The stakes couldn’t be higher in this action-packed and thrilling conclusion to The Blackwell Pages trilogy.

Seven kids, Thor's hammer, and a whole lot of Valkyries are the only things standing against the end of the world.

When thirteen-year-old Matt Thorsen, a modern day descendant of the Norse god Thor, was chosen to represent Thor in an epic battle to prevent the apocalypse he thought he knew how things would play out. Gather the descendants standing in for gods like Loki and Odin, defeat a giant serpent, and save the world. No problem, right?

But the descendants' journey grinds to a halt when their friend and descendant Baldwin is poisoned and killed and Matt, Fen, and Laurie must travel to the Underworld in the hopes of saving him. But that's only their first stop on their journey to reunite the challengers, find Thor's hammer, and stop the apocalypse—a journey filled with enough tooth-and-nail battles and larger-than-life monsters to make Matt a legend in his own right.

"Loki's Wolves brings Norse mythology to the modern world . . . The background and explanation of the legends are clear and a natural fit to the story and dialogue, bringing life to lesser-known Norse mythology . . . Recommended for those who enjoyed Rick Riordan's Percy Jackson and the Olympians series." (School Library Journal)

"This smart, fast-paced, action-packed novel . . . offers readers a solid adventure story that still manages not to skimp on character...An excellent what-to-read-next for Percy Jackson fans, this novel will also please young readers of Marvel's Thor and myth-lovers already familiar with Norse lore . . ." (Bulletin of the Center for Children's Books)

"Loki's Wolves has everything—a fast-paced, exciting plot, endearing and honest characters, Norse mythology with a contemporary twist, and plenty of heart. I can't wait to find out what happens to Matt, Laurie, and Fen!"
(Ally Condie, author of the #1 New York Times bestseller Matched )

"These authors are no strangers to weaving a compelling tale. Once the story moves past the background, the plot picks up quickly and the adventure doesn't disappoint." (Library Media Connection)