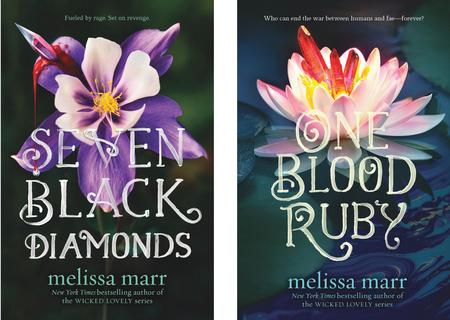 Lilywhite Abernathy is a criminal.

Her guilt lies in her DNA. Lily is half human, half fae, and since the time before she was born, a war has been raging between humans and faeries. The Queen of Blood and Rage, ruler of the fae courts, wants to avenge the tragic death of her heir—a death that was the fault of reckless humans.

Lily’s father has shielded her from the repercussions of her ancestry, but when she’s sent to the prestigious St. Columba’s school, she’s delivered straight into the arms of a fae sleeper cell --the Black Diamonds.

Mysterious, glamorous, and constantly at odds, the Diamonds are planted in the human world as the sons and daughters of the most influential families, and tasked with destroying it from within. Against her will, Lilywhite’s been chosen to join them … and even the romantic attention of the fae rock singer Creed Morrison isn’t enough to keep Lily from wanting to run back to the familiar world she knows.

Melissa Marr returns to faery in a dramatic story of the precarious space between two worlds and the people who must thrive there.

"Lilywhite Abernathy returns, though now she goes by the name LilyDark, allying herself with neither Seelie nor Unseelie courts. It is up to her to make peace with the human world, now that she’s the heir to the Hidden Lands of the fae, but with faeries regularly attacking humans in terrible and vengeful ways, the end to this centuries-old war will be hard won. Ex-heir Eilidh is caught between her royal parents, and the remaining Black Diamonds, a highly trained group of warriors, are always aware of their precarious place between human fame and fae power. Meanwhile, the queen and her assassin Diamonds make dark and sinister plots. Marr’s writing is lush and beautiful. There are context clues littered throughout the text, but unlike the Wicked Lovely series, it’s best to read this proposed trilogy from its beginning (Seven Black Diamonds, 2016). A must for faerie fans who are already hooked on Marr and her captivating worlds.


HIGH-DEMAND BACKSTORY: A new installment in a series from the ever-popular Marr? They’re already lining up."

"The human world and the world of the fae collide in this dark paranormal fantasy. The Queen of Blood and Rage wants brutal revenge on all humans and refuses to allow mortals and fae to interact. She has, however, slyly bred assassins known as the Seven Black Diamonds, who have mixed faery and human blood. Although these Diamonds are brought up in human families, they owe service to the queen when they come of age. Lilywhite Abernathy, daughter of a powerful Mob boss, is one of these carefully placed pawns. She remains ignorant of her secret background until she is sent to Saint Columba, a prestigious boarding school, where she meets the rest of the Diamonds. Plummer masterfully narrates this intriguing novel. As the queen, her voice is regal and cold, inspiring fear and revulsion. The queen’s daughter, Princess Eilidh, speaks in a tone that is jaded, used to but tired of violence and destruction. As Lily, Plummer beautifully conveys a shy, serious, earnest young woman whose light brogue makes her appear deceivingly gentle. In truth, Lily is a strong young woman who was ready to step into her father’s footsteps and who refuses to be intimidated by the Diamonds. Scenes with rock-star heartthrob Creed, who speaks in a low, sensual, growling tone of voice, crackle with intensity. Listeners will eagerly await the sequel!"